Restoration outside sculptures at Villa Pisani

The sculptural group located in the park of Villa Pisani, at the bottom of the pool, in the west sector hosts the sculptural group of Vertumnus and Pomona restored the previous year. The attribution is to the sculptor Giovanni Bonazza and the year of construction is 1720. The subject depicted again draws on the classical tradition: Zephyr, spring wind, and the beloved Flora deity of flowering. The stone material used is soft Vicenza stone alternating, for the base, with a more compact limestone similar to Istrian stone. The outdoor location meant that the sculptural group exhibited the forms of degradation characteristic of stone artefacts placed inside parks and gardens, albeit close to anthropized environments. Erosion, generalized disintegration, flaking, gaps, falling off of material and lack of portions of modeling were the most traceable degradations. Furthermore, biological attack was widespread, and on the stone surface washouts and chromatic alterations were present to a large extent. After intervening, where possible, on the context by pruning the branches of the trees behind the sculptural group, the restoration was carried out by implementing a first phase of punctual pre-consolidation where there were evident de-cohesion or detachment of the stone material; then the biodeteriogenic species were treated with a herbicide. After rinsing and brushing, the biological species were removed mechanically. In order to complete the total elimination of biological residues or endolytic organisms present within the stone particles, catalytic enzymes were used. Once the disinfection of the colonized areas was completed, cleaning was carried out with compresses and mechanical and timely removal of any deposits. The gaps were made up for with grouting using materials compatible with the original in terms of color and grain size. To prolong the effectiveness of the restoration and delay, therefore, the onset of new biological colonization phenomena, a residual biocide product was applied to the stone surface.

Project realised with the support of the Veneto Region. 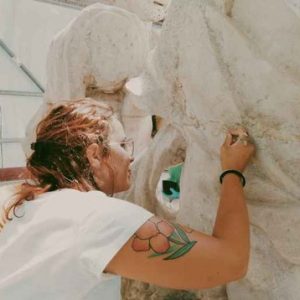